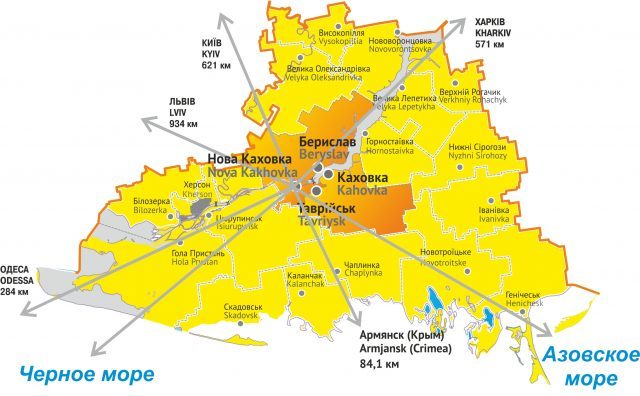 The Tavria Association of Territorial Communities (TATC) includes the cities of Beryslav, Kakhovka, Nova Kakhovka, Tavriysk, as well as the Beryslav and Kakhovka districts, comprising 17.8% of the population of the Kherson region.

The Tavria region is located in the center of the Kherson Oblast, 60km from the capital city of Kherson. It occupies 12% of the oblast's territory and is located on the basin of the lower Dnieper river within the Black Sea lowlands that were washed by the Kakhovka reservoir. The most important water transport artery in Ukraine, the Dnieper river, passes through the center of the region, connecting the region with the Black Sea as well as other industrial cities located upstream.

The region is at the crossroads of the state-owned highway (Kyiv - Simferopol) and another highway of international importance (Rostov-on-Don - Odessa-Reni). Within the region there is a developed network of highways, about 95% with concrete covering. The region has direct bus service with major industrial cities such as Kiev, Dnipropetrovsk, Kharkiv, Odesa, Simferopol. The port city of Skadovsk on the Black Sea and the port city of Genichesk on the Azov Sea are each 120km away, while the Askaniya-Nova reserve is 40 km to the south.

The Tavria region, as well as the Kherson Oblast as a whole, has significant natural and recreational resources for the development of tourism. Tavria is one of the most picturesque regions of the Kherson region located on the banks of the Dnieper River. The region has unique opportunities for recreation (e.g. hunting grounds, fishing, water tourism, recreation on the Dnieper). An undeniable advantage of tourism development in the territory s the presence of the neighboring islands, which can accommodate various kind of health facilities, hotels and other complexes. The tourist route "Southern Gates of Ukraine" passes through the Beryslav district. The main attractions of history and culture of the Beryslav region that are highlighted in the tourist route include the 18th Century Svyato-Hryhorivsʹkyy (Bizyukiv) monastery in the village of Chervonyi Mayak and the historical and cultural reserve "Kam'yansʹka Sich."

Despite the difficult conditions of the current economy, the Tavria region is an area of growth in the Kherson Oblast. Large enterprises are concentrated in the region, many of which are world-famous brands such as Chumak, Cargill, Freedom Farm, Green Team, KZESO, Kakhovka Protein Agro, and Plant Building Materials #1. The processing of vegetables, tomatoes, fruits, oilseeds and grapes is also concentrated in the region. All Ukrainians know of Tavria as a territory of high agricultural production. The world's leading companies in plant protection products, seeds and agricultural machinery are located here. It is believed that the region produces more than 50% of the gross domestic product of the oblast.

In conclusion, it can be said that the TATC has a rich historical heritage, with a favorable geographical location, rich natural resources, a good business climate and developed infrastructure, a competitive agro-industry that is attractive to investors and businesses, as well as comfortable conditions for living, development, and recreation.

Be a Partner
Be an Information Partner